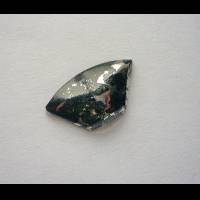 Native, or natural, iron is rare in the mineral world, and as such is rarely encountered in gemstones, although it can be fashioned into jewellery, especially iron found in meteorites - by far the most common source.

Iron, or nickel-iron alloys, comprises those meteorites that are metallic in nature. When a nickel-iron meteorite is cut and treated with acid, it can reveal characteristic criss-cross patterns called Widmanstätten patterns, after the discoverer. Jewellery comprising meteorite iron treated in this way is not very uncommon.

Native iron is also found in some igneous rocks on earth, although this is very much rarer.

This table shows the variety of hues this gemstone can be found in. Click on a photo for more information.
Copyright © Jolyon & Katya Ralph 1993-2022. Site Map. Locality, gem & photograph data are the copyright of the individuals who submitted them. For more information please contact the . Gemdat.org is an online information resource dedicated to providing free gemmological information to all.