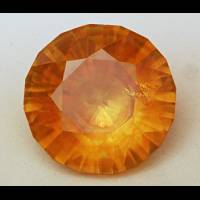 Wulfenite was named after Franz Xavier von Wulfen, an Austrian mineralogist. It was first described in 1845 for an occurrence in Bad Bleiberg, Carinthia, Austria.

It occurs as thin tabular crystals with a bright orange-red to yellow-orange colour, sometimes brown.

Wulfenite has very attractive gemmy appearance, but the crystals are often much too thin and brittle for cutting.