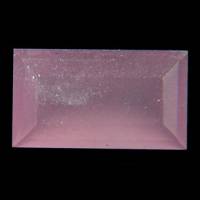 The name Muscovite derives from its use in windows as muscovy glass, Muscovy being an old Russian Province.

Muscovite is the most common member of the Mica Group. It typically occurs as massively crystalline material in "books" or in flaky grains.

Muscovite can be pink, colourless, silver-white, yellowish, greenish with a pearly luster on cleavage faces. It often has a sparkly look.

Because of its silvery sheen, Muscovite is sometimes called cat's silver.

This table shows the variety of hues this gemstone can be found in. Click on a photo for more information.
Copyright © Jolyon & Katya Ralph 1993-2022. Site Map. Locality, gem & photograph data are the copyright of the individuals who submitted them. For more information please contact the . Gemdat.org is an online information resource dedicated to providing free gemmological information to all.